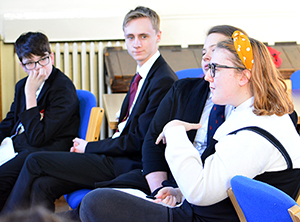 On behalf of Hive, actor, writer and facilitator, Stacey Sampson recently worked with students at Hall Cross School in Doncaster. The group engaged in a mix of practical drama and writing exercises and Stacey spoke about her journey to being an actor, writer and everything in between! From joining a local theatre group as a child that led to her first professional gig as a teenager, to how she developed into writing for theatre, and wrote her first novel.

“It was great having Stacey come in. She stressed the importance of writing being about building from the ground up, and about memories being the best things a writer has. They are just stories waiting to be told.” Ciah, Hall Cross Student

“For me, finding a group of like-minded people was magic. I started youth theatre when I was 13 and discovered not only a ton of new friends (still my best buds 20 years later!) but also came into contact with professionals who put their heart and soul into supporting us, imparted incredible skills, and made sure we heard about every opportunity going to further our dreams. There was never pressure to be the next big thing, only to go at our own pace, hone our crafts and most of all, have fun. I became aware that careers in the arts were accessible – Even to me! And regardless of who decided to pursue that path, we all gained irreplaceable confidence to take with us into the world. Organisations like my youth theatre, and like Hive (Doncaster Young Writers) can be life-changing. You might not know it at the time, but such rich experiences and relationships forged in brilliantly creative surroundings set off sparks that burn long into your future.” Stacey Sampson

Thanks to Mike Dougherty, Head of Performing Arts for helping to arrange this visit.
If you’re a young person (14-19) in Doncaster, or at Hall Cross, and you like writing…join us! Free and relaxed sessions fortnightly. More info. 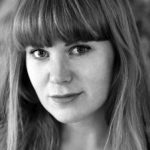 Stacey Sampson is an actor, writer and facilitator born and bred in Rotherham. She has worked in theatre, film and television for twenty years, and is known for her role as Jennifer in Channel 4’s This Is England series (’88 and ’90). Stacey is an Associate Artist with Third Angel and several other companies and her plays have toured nationally to theatres and non-traditional spaces.

She also specialises in collaborative writing and regularly works with schools, libraries, young offender programmes, mental health and homelessness organisations to create bespoke scripts and performances. Her children’s fiction has won the Mslexia Novel Competition, a Northern Writers’ Award and the Arvon Award.