A massive congratulations to Sheffield Young Writer’s Georgie Woodhead, the winner and one of five shortlisted for the BBC Young Writers’ Short Story Award with First Story and Cambridge University

Georgie’s story Jelly-headed, described as ‘a comic, quirky and ultimately tragic story of two friends, a night out and a lightning strike that brings devastation. A story about guilt and the absurdity of life, this funny, subversive story is ultimately about searching for meaning or connection’, has rather excitingly been recorded by a professional actor for BBC Radio 1. You can listen to it here.

The shortlist was announced on BBC Radio 1 on 22nd September, and all five teenagers attended the exclusive BBC Short Story Awards ceremony with their families on Tuesday 1 October 2019, when the winner was announced live on BBC Radio 4’s Front Row. There, they met high-profile authors, publishers, agents and broadcasters at the award ceremony.

You can hear an interview with Georgie here (16mins in)with Paulette Edwards on BBC Radio Sheffield. 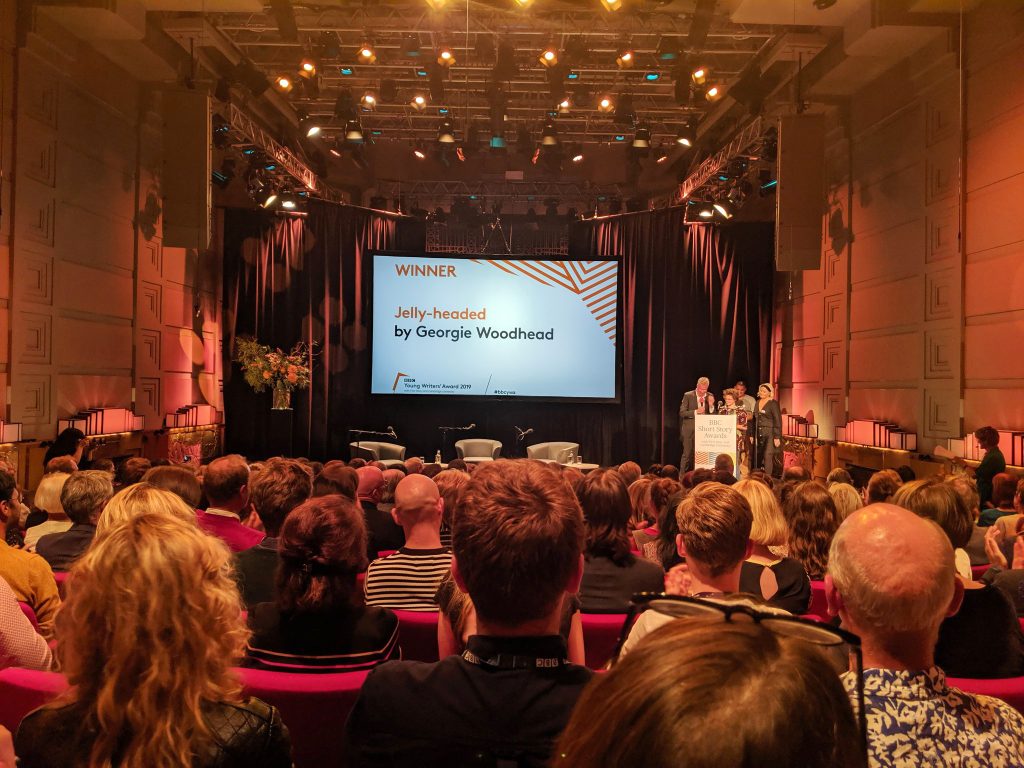 Congratulations also to the following stories and shortlisted:
‘Insula’ by Eleanor Clark, 16, from mid-Devon
‘Another Pair of Eyes’ by Tallulah Howarth, 17, from Macclesfield
‘The Blue of Spring Violets’ by Isobel Paxton, 17, from Edinburgh
‘Allotment’ by Rowan Taylor, 16, from Reading
The five shortlisted stories are available to read and listen to on the Radio 1 website. They are also available on BBC Sounds as part of the Short Works short story podcast. www.bbc.co.uk/ywa

For the first time, a love of poetry and a desire to experiment with the short story form has been mentioned by each of the shortlisted writers, with 2018 Foyle Young Poet Georgie Woodhead featuring on the shortlist. The five stories – many deeply personal – range from the comic, to the lyrical, to the tragic, and are written by an all-female shortlist of young writers aged 16 and 17 years from across the UK.

Showing a fearless confidence in form and tone, the stories explore divorce, coming of age, mental illness, loneliness and the meaning of life, and range from the meditative to flash-fiction. Whether it be the brutally evocative story of kinship found in hospital as a teenager battles anorexia; the implosion of a young girl’s family life told through the change of seasons on her father’s allotment; the tragi-comic story of a freak accident on a nightclub roof; a search for the meaning of home via a journey from island to city; or the funny and tender story of an introvert archivist and his connection to an exhibit – each finalist has shown a fresh, sophisticated and unique approach to their subject.

“This was one of the most stimulating and collaborative experiences of judging I’ve ever had and we’ve emerged with a shortlist to be proud of. The writers demonstrate all the skills I look for in any piece of writing, from immediacy of voice to sensitive pacing, and most of all an emotional connection made with the reader. I think the way a story is told is just as important as the story itself, and these writers have each paid attention to language as well as plot.”

“In a modern world in which the pace of life so often outstrips our ability to process it, these wonderful stories all show how words can create a bubble of calm in which to feel, remember, laugh and cry. Our shortlistees represent a new generation of writers whose concerns and use of form both link them to the past and yet depart from it. The University of Cambridge is delighted to celebrate these young women shortlisted for the BBC Young Writers’ Award with First Story and Cambridge University, who will shape the future of writing just as Cambridge alumni such as Zadie Smith and Helen Oyeyemi have done before them.”

Georgie Woodhead is 16 years old and lives in Sheffield. She is an avid writer and greatly enjoys the creative process. Georgie is also a skilled poet and won the esteemed Foyle Young Poet Award, was highly commended in the Cuckoo Northern Writers Award, and was the runner-up in the young people’s category of the Ledbury Poetry Competition, all in 2018. Georgie likes to read novels and short stories, mainly contemporary fiction, from writers such as Etgar Keret, Kafka, J.D Salinger, and Arundhati Roy. In the future, Georgie hopes to continue to develop her writing work, and to travel.

ABOUT THE AWARD: This is the fifth year of the BBC Young Writers’ Award which invites all 14 – 18-year-olds living in the United Kingdom to submit short stories of up to 1,000 words. The Award was launched as part of the tenth anniversary celebrations for the BBC National Short Story Award and aims to inspire and encourage the next generation of writers. Previous winners are Brennig Davies (2015), Lizzie Freestone (2016), Elizabeth Ryder (2017) and Davina Bacon (2018).
Partners: BBC, First Story & Cambridge University